Just some lines from the Dutch

Just some lines from the Dutch

On januari 2, 2019, Posted by Wim Oostra , In 2018,Nieuws,Reisverslag, With Reacties uitgeschakeld voor Just some lines from the Dutch

Christmas is with family yet some things have to be done! Our correspondent has given himself the task of writing a short note of what happened at the Low Lands by the Sea, otherwise known as the Netherlands, at some Drascombes. We surely are anxious what happenes on the British Island. Although, as Facebook shows, Drascombes are almost everywhere, to mention for instance France, the USA, even the Middle East.

As usual, our first event was the Spring Meeting in March at the old town of Elburg, formerly at the Zuiderzee now IJsselmeer. The town is known for its Old Dutch Botter fleet and a museum wharf was visited where enthusiast volunteers  build them again. It is a lot of wood to maintain and to restore. We had a nice meal (they know how to prepare eel at Elburg) and an expert lecture on how fast the Wadden sea is changing. There is  a vast mass of water and sand that is difficult to predict from practice and from math.

Of course, after the Spring Meeting the sailing starts! Traditionally the Dutch NKDE members can choose between a supposed more easy Smiscruise and a more difficult Smiscruise. The easy Smiscruise started at Harlingen in the North. We all gathered and left early on the tide as the bridges are low in that town. It appears that the majority of a fleet had a good time at sea, although yours truly had to return with the rudder stuck in the keel beam, after it fell back. Sailing single handed and not thinking far enough in time to prevent mishaps, has its drawbacks. 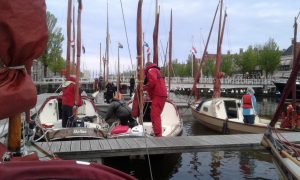 As a consequence, you correspondent decided to spend some time easy sailing while revisiting a well known Dutch lake called the Kaag with some friends. For those who like little waterways and moderate sized lakes this is superb, although traffic is much more busy compared to Friesland. Also, time has progressed since my generation learned to sail at those lakes and some types of boats have already disappeared. The weather has changed also as there was little wind and high temperatures, which was uncommon during the Sixties (rain…). 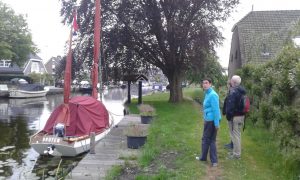 The Province of Friesland organized a few weeks of fossil-free transportation as much as possible and some landlubber enthusiasts organized a meeting near Leeuwarden with both a fossil-free fleet and fossil-free cars at a so-called Aquaduct, which is a canal crossing over a highway. The Natuurlijk Varen club (see www.natuurlijkvaren.nl) has amongst many rowing-and-sailing-dinghies a small contingent of Drascombes. These Drascombes joined and certainly helped the dinghies from Ossenzijl to Leeuwarden as the wind was pure North and it is impossible to keep tacking in all those canals and still meet at the agreed time. Nevertheless, with Drascombe outboard power, the trip was unforgettable and surely easy-going, see http://www.natuurlijkvaren.nl/geschiedenis/2018-elfwatertocht/ . Personally, I have the best memories of a) the theater performance on Marchepolle island in the Tjeuke lake, b) a most pleasant reception at the Sailing Centre at Grou and c) camping on a meadow near Leeuwarden with a dinner supplied by the local Chinese restaurant. 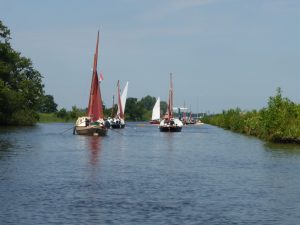 Again, the Summer Weekend had very good weather and AGAIN it was easy going, apart for those enthusiasts that took part in the Sailing-Backwards-Trophy event. All kinds of non-standard sails were hoisted including a large size umbrella and one Captain fearlessly jumped in and started pulling his Coaster backwards when swimming. Alas, a small spinnaker evidently was more powerful… 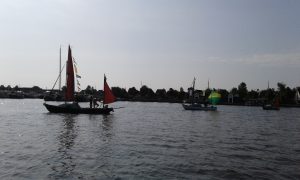 The Traditional End-of-the-Year Wadden weekend has had its 25th anniversary and is supposedly the last. There is a nice article on the Dutch site at https://www.nkde.nl/2018/12/06/25-jaar-traditioneel-winter-weekend-tww/ and yes indeed it was cold and wet. But somehow your correspondent was waiting at the fire place for stories of storms and hardship and they never came! Still, a salute to those sturdy men and women is on its place.

Let’s see what are the possibilities for 2019 with some fabulous sailing opportunities, some of which international. The choices are phenomenal. Please follow us (in Dutch!) on https://www.nkde.nl/ .